History of the fortress through famous people

Impressive medieval fortress encamped on an eminence overlooking the Vienne, it is here at the fortress of Chinon that the King of France Charles VII first met Joan of Arc in 1429. This city is a must-see destination in the Pays de la Loire.

The royal fortress of Chinon dominates the town of Chinon and was built on a rocky spur along the Vienne, a tributary of the Loire. As often, the primary role of the fortress is to control a strategic position, here the passage on the Vienna. The village has developed below, on the shore. It should not be forgotten that in the Middle Ages, waterways were the only means of transport for heavy loads (wines, materials, cereals, etc.).
Gradually, the fortress was structured in three distinct parts and stylized in the form of three towers on the city’s coat of arms.
Thus, from west to east, the spur is barred by a series of ditches – dry ditches – that separate the three castles: Fort Coudray, Middle Castle, and Fort Saint-Georges. Each of the three castles has an independent enclosure. It is in the main castle, the Middle Castle, that develop the main lodgings and the Priory Saint-Melaine. 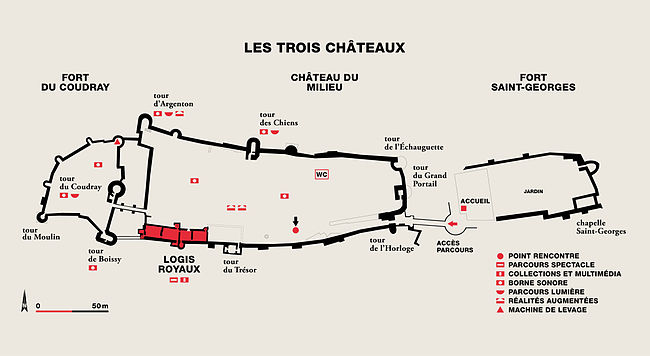 As often in our history, these strategic sites are subject to multiple occupancies. Thus, at the end of the Roman Empire, the promontory is fortified and becomes a castrum (see Gregory of Tours) and stone blocks from ancient monuments for its foundations will be reused. In 463, Chinon, then possession of the kingdom of the Visigoths, will resist victoriously the assault of General Romain Aegidius.

The first elements of the current castle date from the 6th to the 10th century. It is without doubt to Foulques IV that we owe the completion of the new enclosure of the fortress. He raises taxes for this purpose, between 1087 and 1105.

Parallel to this, Henry II Plantagenet is designated heir to the crown of England in November 1153. At its peak, the Plantagenet territory extends from the Pyrenees to Scotland. In order to ensure unity, Henry II will make Chinon its continental capital. It is from this moment that the castle will take the dimensions that we know today.
Henry II Plantagenet stores in Chinon a part of the royal treasury and stayed there frequently from 1160 to 1180. In 1173, he removed Aliénor from power and had it locked in the fortress of Chinon, before sending it under house arrest in England. 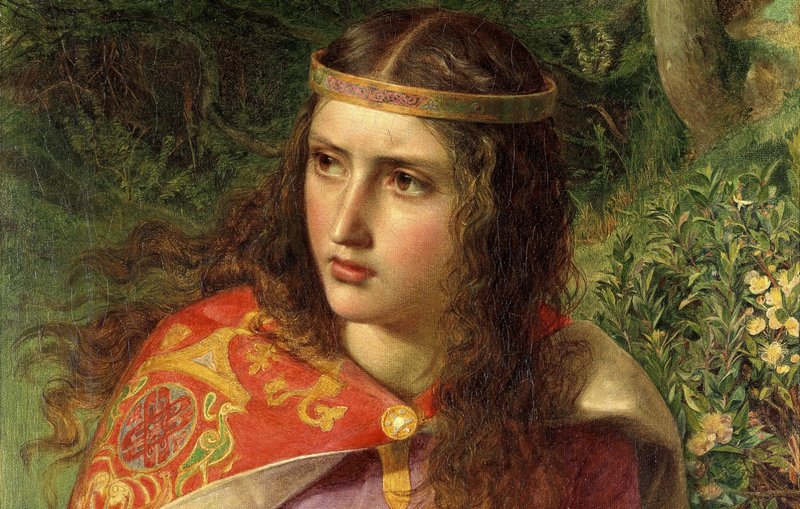 Henry II died in Chinon in 1189. His great achievement is the construction of Fort Saint-Georges and a palace within it. This palace was discovered between 2003 and 2005 during archaeological excavations. He was not known before. This is a very important discovery, as there are very few palaces of this period that have come down to us. The remains are currently preserved under a garden. The rampart overlooking the Vienne is still visible and has been restored in all its majesty.
A little later, following the death of Richard Lionheart, John Lackland can then gird the crown of England. He decides to strengthen the castle because he is aware of the strategic importance of Chinon and he prepares the castle for war. During these works towers and ramparts are created and reinforced, the western end of the promontory is isolated by a moat and becomes the fort of Coudray.
Shortly after, John had Isabelle of Angoulême, a child of 12 or 13 years old, kidnapped from Hugues de Lusignan, and married her with great pomp to Chinon. The scandal is huge! The betrayed fiance and many lords of Aquitaine, vassals of Jean but indignant, revolt and appeal to the king of France feudal. Philip Augustus takes the pretext of this incident to confiscate the continental possessions of the Plantagenets and goes to war against John. In June 1205, after a nine-month siege, the castle will be taken. This fact is at the origin of the dismantling of the Plantagenet empire on the continent.

During the 100 years war, the English, led by Henry V won decisive victories, including Azincourt (October 25, 1415). A humiliating treatise follows in which Charles VI recognizes Henry V as his successor, to the detriment of his own son, the Dauphin Charles. The Dauphin does not accept this treaty and is proclaimed king of France. His kingdom, the “kingdom of Bourges”, corresponds approximately to France south of the Loire. It is in this context that Joan of Arc arrives in Chinon February 23, 1429.

This meeting will give rise to the myth of Gratitude (where Jeanne recognizes the King among the crowds of courtiers). It is not so, because there was not one but two interviews in Chinon. The first takes place two days after his arrival. It is led to the king’s room where he receives it in small committee. At the castle, it is housed in the dungeon of Coudray. Then Charles VII sent him to Poitiers for doctors of theology to judge his good faith. On his return, Jeanne was again received by the king in the King’s chamber, between March 27 and April 5, 1429. This episode which took place in the walls of the fortress marks a turning point for the War of Hundred years. From 1431, the political and military situation of the English deteriorates. The hatred of the English leads to many uprisings and in Normandy the situation is more and more untenable. From 1435, the English lost their main cities but it was not until 1453 to put an end to this war.

Following these events, the fortress devoid of strategic role is abandoned in favor of more modern castles, falls gradually into ruins. Inventories from the early seventeenth century describe it in a state of complete decay. In 1840, the fortress is classified Historical Monument, but the ruins are dangerous, and in 1854 the municipality asks for the demolition. The intervention of Prosper Mérimée will be decisive and will mark the beginning of the restoration of the fortress of Chinon which continues today.