Visit the Loire Valley Castles during your camping holidays

On the borders of the Tourraine and Poitou regions, or more precisely the Indre et Loire and Vienne, Camping Le Petit Trianon is very well placed to visit the exceptionally rich heritage of the Loire Valley Castles, a mecca of the French Renaissance. As such, several of these remarkable buildings are listed as UNESCO World Heritage Sites. From the campsite, you will be able to reach some of these majestic sites in less than an hour by car, which will dazzle you both by their beauty and the many historical episodes that took place there. But the castles of the Loire Valley are not just that! Some of them were powerful fortresses, often alternately French or English, whose walls had to endure the terrible sieges of the 100 Years War. Finally, Chinon and Poitiers witnessed the incredible story of Joan of Arc, the 17/18 year old girl who was to take the head of the Royal Army to “Bouter l’Anglois hors de France”!
So during your stay, don’t miss to visit the royal fortresses of Chinon or Loches which will remind you of this episode in the history of France. Discover also the majestic gardens which make the reputation of the region of Tours such as Villandry or Le Rivau. Make a detour to the castle of Ussé which inspired Charles Perrault for his “Sleeping Beauty”. As a family or as a couple, from the Petit Trianon campsite visit these remarkable places while enjoying the conviviality, tranquility and comfort that our campsite can offer you. 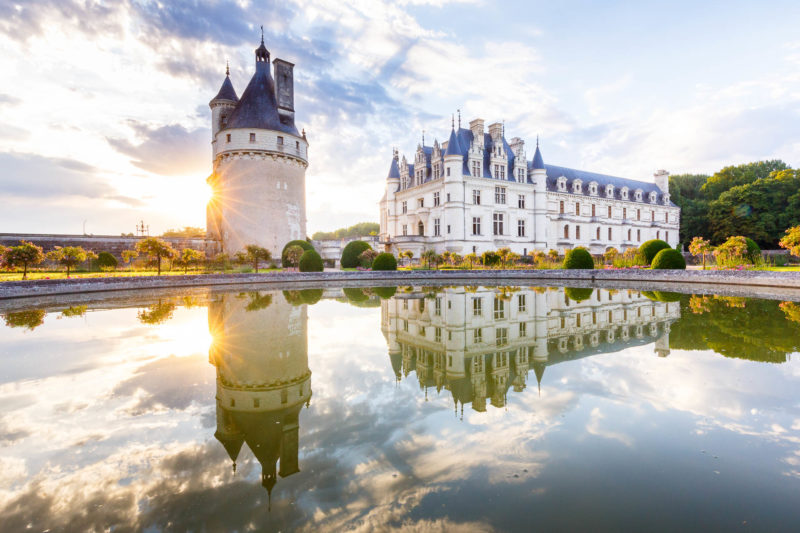 Discover Chenonceau Castel in the heart of the Loire Valley Castles with its famous two-storey gallery built under Catherine de Medici. Its history is strongly marked by several female personalities: designed by Katherine Briçonnet in 1513, enriched by Diane de Poitiers and enlarged under Catherine de Médicis, it is also known as the "Château des Dames". Once a royal residence, it became a private residence in 1601.

Distance from the campsite 73 km 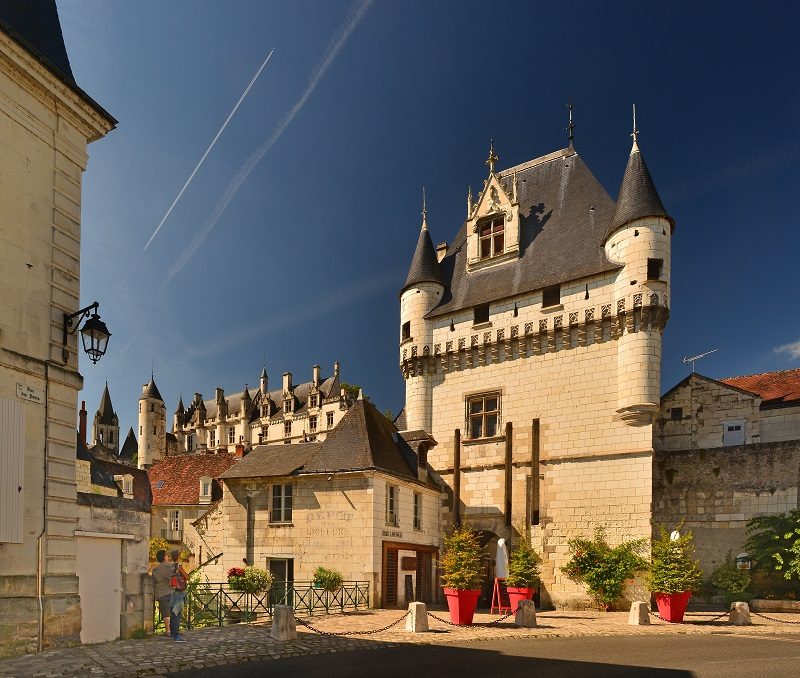 Loches is one of the rare French medieval cities to still have almost all of its 12th century ramparts. This fortified enclosure of two thousand meters, envelops a spur that commands the Indre valley and is cut off from the plateau by a huge ditch. The Romanesque keep erected around the year 1000 by Foulques Nerra is one of the largest and oldest in Europe. In the upper town of Loches, like Chinon, there is no need to look for any modern buildings. Here, everything or almost everything dates from the 15th century and the Renaissance, apart from the shops of course, and the numerous stalls that animate the lower part of the town on market days. The latter is considered to be one of the most important in Touraine.

Distance from the campsite 47 km 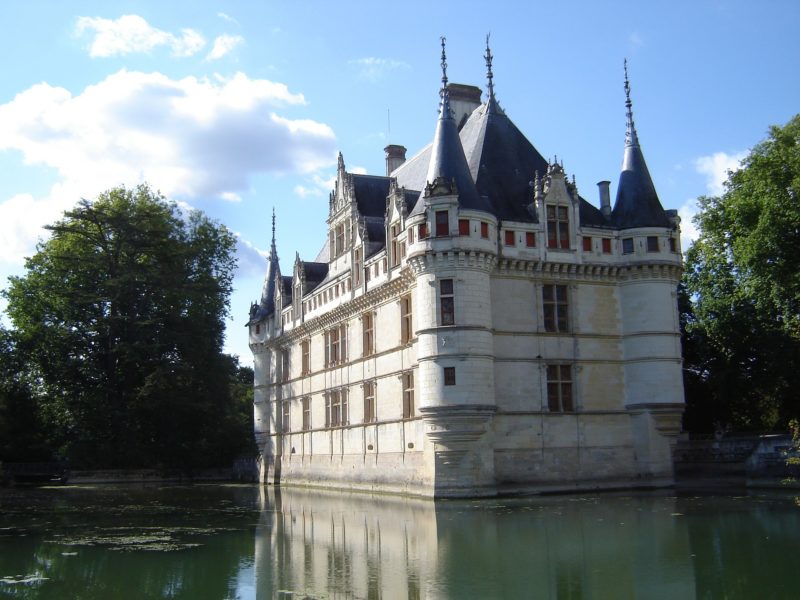 The Château Azay-le-Rideau was built on an island in the middle of the Indre, during the reign of François Ist. A subtle alliance of French traditions and innovative decorations from Italy, it is a splendid representative of the new architectural art of the 16th century.

Distance from the campsite 51 km 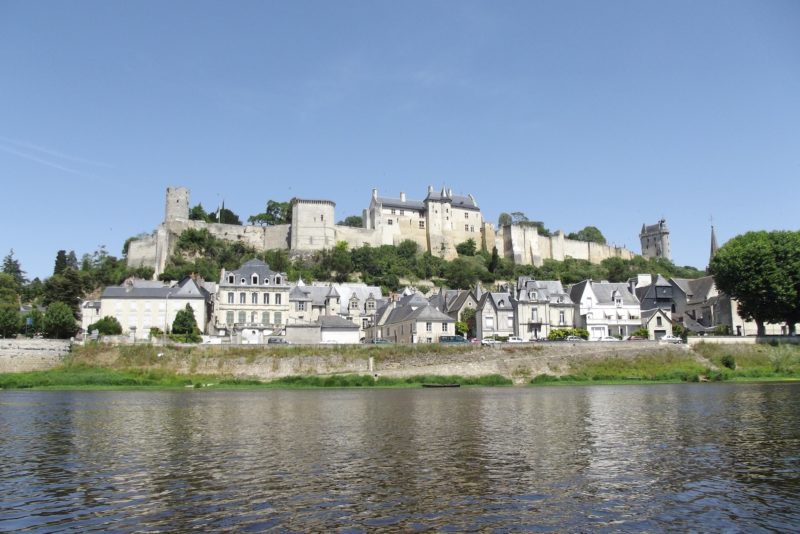 Chinon is located on the Vienne river, on a strategic position on the borders of Touraine, Anjou and Poitou. A spur, fortified in antiquity, overlooks the city. The city, thanks to its imposing fortress, has long played a key defensive role. The charm of the City of Chinon is due in particular to its typical Touraine architecture, based on tuffeau (local white stone), which can be found among other things in its fortress but also in its historic town centre along the Vienne River.

Distance from the campsite 50 km

Touraine nicknamed "the garden of France"

The remarkable parks and gardens of Touraine

Villandry Castle and its gardens

The gardens are a vegetal masterpiece of delicate colours, artistically combined species, trimmed hedges, linden trees lined up and arbours embalmed by roses. The rigorous arrangement of the gardener here commands nature while magnifying its beauty. If Villandry is first and foremost an exceptional garden, it is also a pretty castle, which sensitively recreates the atmosphere of past centuries.

Distance from the campsite 58 km

Rivau Castle and its gardens

The Château of Rivau is a medieval Loire Valley castle surrounded by 14 fairy-tale gardens. It stands in the middle of fields 10km from Chinon. The magnificent Gardins du Rivau fantastically blend scholarly references, history and resolutely modern options around the theme of fairy tales. The historical part, recreated from 15th century documents, evokes both the end of the medieval period and the beginning of the humanist period through a succession of paintings (mille-fleurs carpets, secret garden, orchard of paradise... without forgetting the vegetable garden of Gargantua in homage to Rabelais). The garden of Aliéonor d'Aquitaine features plants with a magical effect, whether they are endowed with an evil or beneficial effect.

Distance from the campsite 40 km